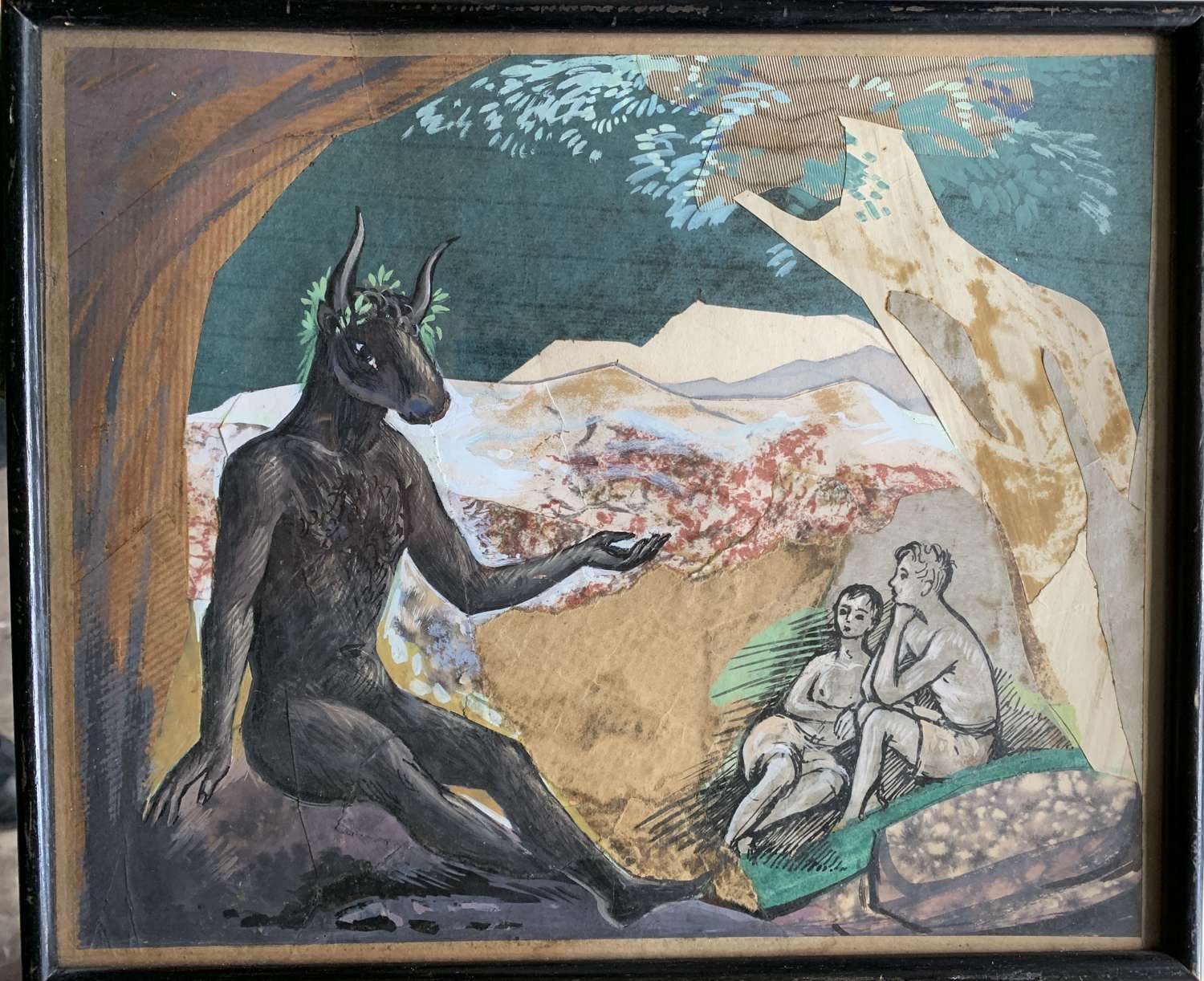 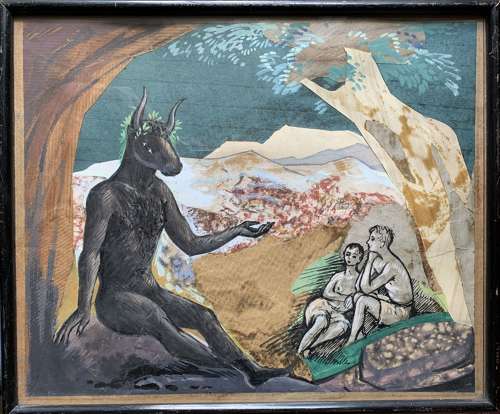 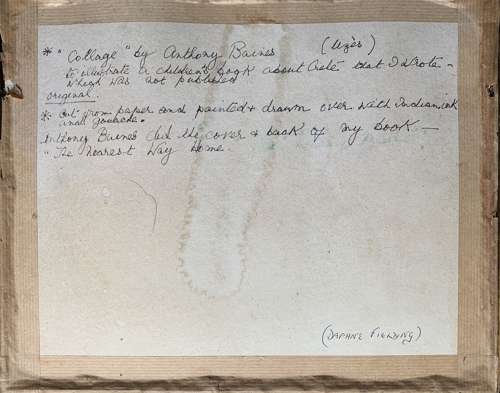 An interesting pair of mixed media collages by Anthony Edward George Baynes, paper, ink and gouache illustrations for a planned children's book on Crete by the well known society author Daphne Fielding (previously Marchioness of Bath). Each being a stylised depiction of tales from Greek mythology, one of the Minotaur, the other Jason with the Golden Fleece.

One is annotated to the reverse as follows:

"Collage" by Anthony Baines (sic) (Uzes) about Crete that I wrote which was not published"
"Original, Cut from paper and painted & drawn over with Indian ink and gouache.
Anthony Baines (sic) did the cover and back of my book "The Dearest Way Home"
(DAPHNE FIELDING)

Anthony Edward George Baynes (1921 - 2003) was a painter, illustrator, muralist, furniture decorator and theatre and stained glass designer. Born in New Zealand, he came to London where he studied at the Slade School of Art; where his fellow students included Kyffin Williams and Bernard Dunstan, and later studied at the British School of Archaeology in Greece. He remained in the Mediterranean for some years, where he painted, travelled and occasionally taught. In the early 1960s he returned to England and settled in Oxfordshire.  He executed mural decorations for Portsmouth town hall, the naval barracks in Portsmouth and Plymouth, and elsewhere. Working principally in oil and gouache he produced landscapes, portraits and decorated furniture, as well as designs for book-jackets for the publishers John Murray, Jonathan Cape and Eyre & Spottiswoode. His work combines Grecian fantasy in the manner of Rex Whistler with a neo-romantic style similar to the work of John Minton and John Caxton.

Daphne Winifred Louise Fielding (1904 - 1997) was the eldest daughter of George Vivian, 4th Baron Vivian and raised at Glynn, Cornwall, where the family were known as the 'mad Vivians'. She moved in the world of the "Bright Young Things" in the 1920s and later produced a series of popular books about high society and the history of Longleat.

She married Henry Thynne, Viscount Weymouth in 1927 and from 1946 was the Marchioness of Bath. The couple had five children, her eldest son, Thomas Timothy Thynne, died in infancy and her second son Alexander George Thynn, became the 7th Marquess of Bath. The couple divorced in 1953 and she remarried Major Alexander Wallace Fielding later the same year. The couple lived in various countries during their marriage, included Uzes, in the South of France, surrounded by pets and visited by many friends. (The reference to Uzes in the inscription would indicate these works were produced by Anthony Baynes whilst visiting Dorothy at her home in Uzes).