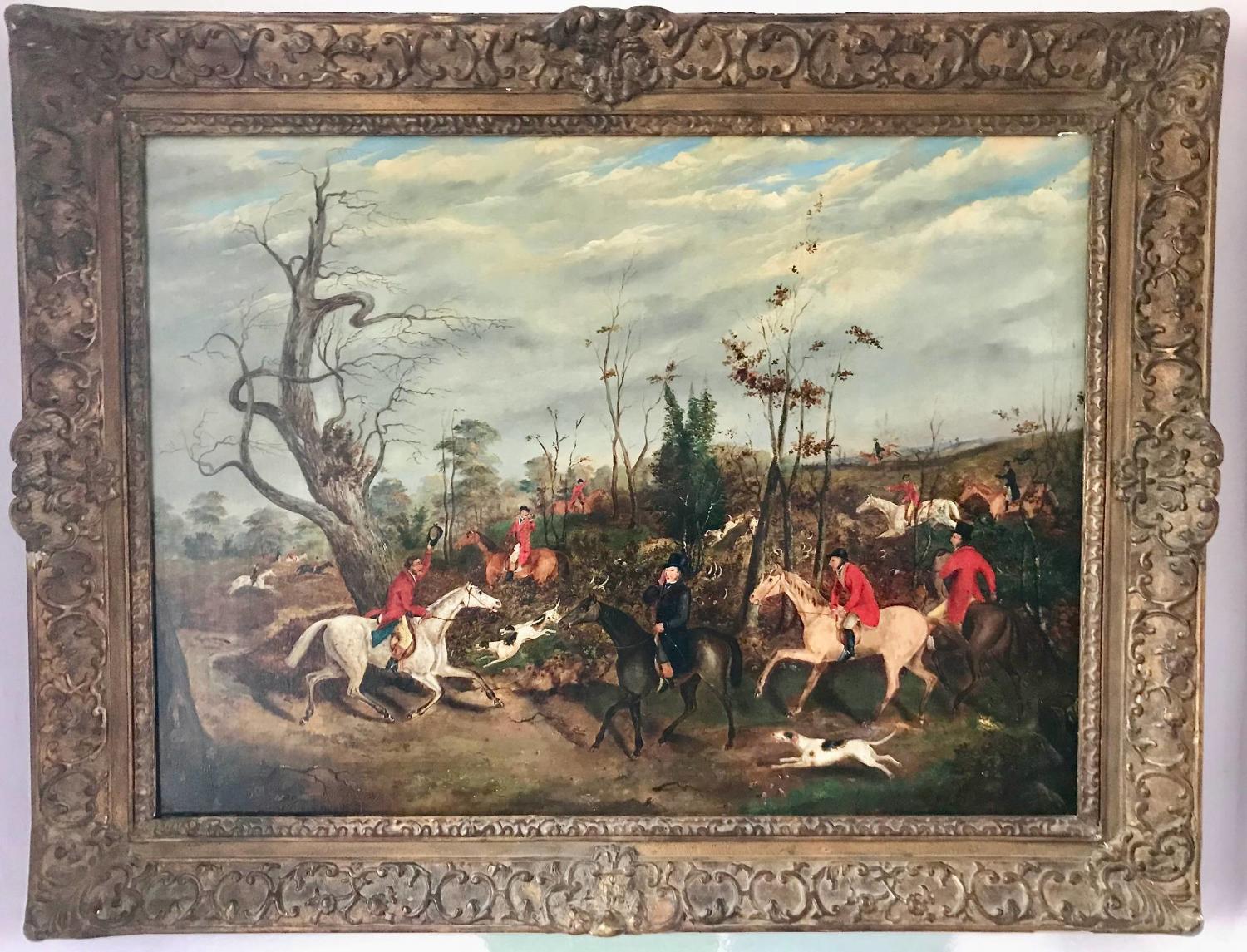 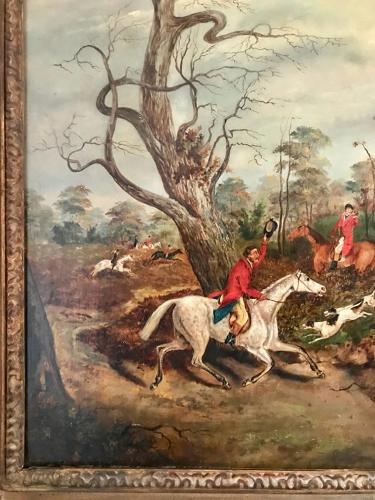 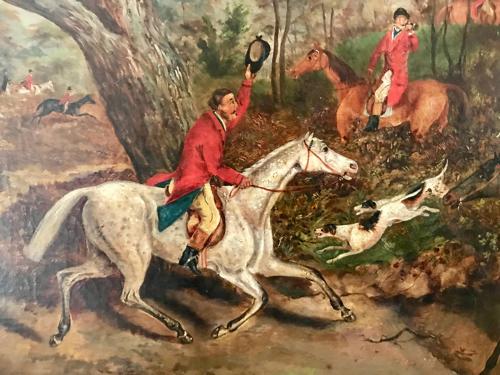 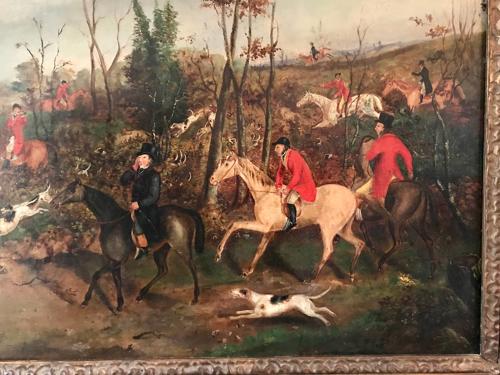 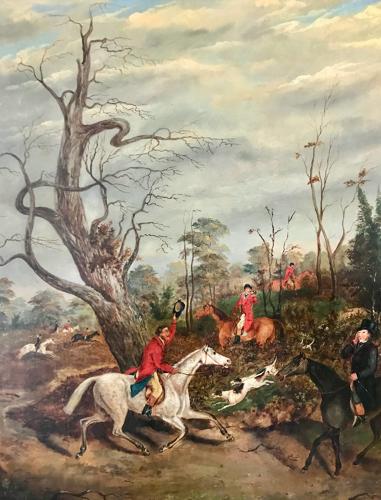 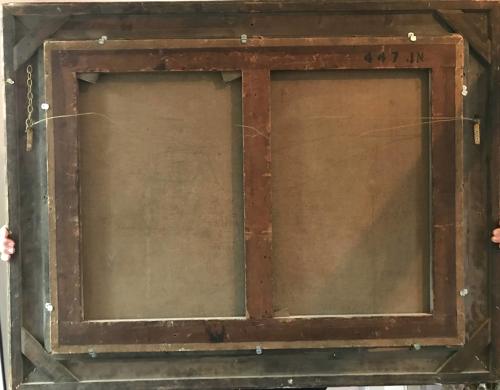 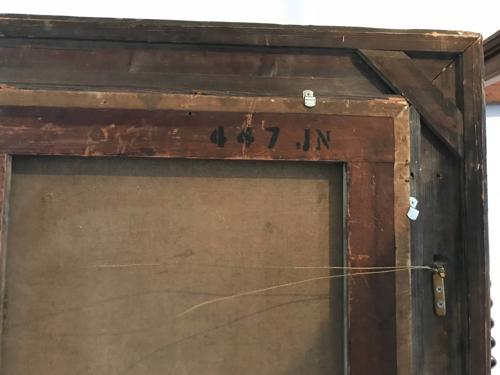 H: 97cm (38.2")W: 123cm (48.4")
SOLD
Attributed to Dean Wolstenholme Jnr (1798-1882), 'Breaking Cover', Hunting Scene, Oil on Canvas, mid 19th Century, within original Louis XIV style gilt gesso frame.
97cm x 123cm including frame (72cm x 99cm visible canvas)
This is a large scale painting for the artist who's oil paintings are generally smaller in size.  This would perhaps suggest that this was a commissioned painting.
In very good condition overall.  The painting appears to have been re-lined in the late 19th or early 20th century.  It bears a Christie's stencilled property number on the reverse where it was sold for the sum of 9 guineas in 1945.
The painting depicts a hunting scene with the fox breaking cover in the bottom left the painting.  In the centre is the master of the hunt, waving his hat, indicating that the fox has got away, the gentleman dressed in black to his right on a smaller mount is very likely a vicar who by tradition, in the 19th century, would often join the hunt but would not wear hunting dress.
Artist's Biography:
Dean Wolstenholme II, the son of Dean Wolstenholme I, was born in Waltham Abbey in 1798.  He is best known as a painter of hunting and sporting scenes and also as an engraver.
He first studied under his father before attending the Royal Academy Schools in London.  He enjoyed considerable success during his lifetime, exhibiting extensively at the Royal Academy from 1818 onwards and also at the Society of British Artists.  He received many commissions, including portraits of horses and hounds from patrons such as Lord Glamis, Colonel Joliffe, the Earl of Egeremont, Lord Dacre and many others.  Commissions from Lord Glamis included a portrait of  himself in highland costume with a favourite bloodhound at his side, which is now in the possession of the Earl of Strathmore and hangs at Glamis Castle.  Another portrait of Lord Glamis with his staghounds is now in the possession of the Hon Francis Bowes Lyon of Ridley Hall, Bardon Mill, Carlisle.
Many of the hunting scenes included backgrounds of landscapes in Essex and Hertfordshire.  He also painted a number of scenes of the Essex Hunt which in turn were reproduced as engravings and also portraits of its members with horses and hounds.
In addition to the hunting and racing scenes his sporting subjects also include cock fighting, angling, portraits of fighting dogs and racing pigeons.  A keen pigeon fancier he was well known for breeding fancy pigeons, illustrated Easton's Book on Pigeons and painted portraits of many notable prize-winners, many of these he afterwards engraved in life size.  A set of fourteen of these coloured engravings are now in the print room at the British Museum.
Having lived in the Gray's In Road for most of his adult life, he retired to Highgate, North London, where he continued to paint animal subjects, hunting and coaching scenes and local landscapes until his death in 1882.